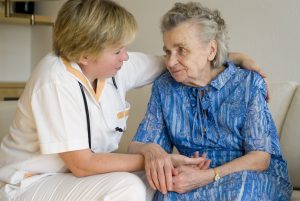 Realizing that a spouse, parent, or other loved one has reached a point at which you can no longer provide the level of care needed, is never easy. The next step is equally difficult – choosing a nursing home. Of course, you want the best care possible for your loved one. Like many people, you may make the assumption that a for-profit nursing home would provide a better quality of care for your loved one. According to a recent study, however, you would be mistaken. The study concludes that the care at for-profit nursing homes is, on average, worse than that offered at not-for-profit facilities.

“We saw more — and more serious — diagnoses among residents of for-profit facilities that were consistent with severe clinical signs of neglect, including severe dehydration in clients with feeding tubes which should have been managed, clients with stage 3 and 4 bed sores, broken catheters and feeding tubes, and clients whose medication for chronic conditions was not being managed properly,” said study leader Lee Friedman.  Friedman, an associate professor of environmental and occupational health sciences at the University of Illinois at Chicago, added that substandard care falls within the definition of elder abuse.

The study included 1149 people, aged 60 and older, who were seen in five Chicago-area hospitals between 2007 and 2011 for health problems that could be related to poor care. The researchers assessed the relationship between residence type—community-dwelling, not-for-profit facility, for-profit facility—and clinical signs of neglect.

The researchers used the Clinical Signs of Neglect Scale (CSNS), which was developed by Friedman and his colleagues. The CSNS quantifies health problems related to substandard care and health outcomes among individuals they identified living in private homes, nonprofit nursing homes and for-profit nursing homes. The scale lists about 24 conditions, ranging from constipation and dehydration to more serious issues such as severe bed sores and broken catheter tubes. Individual clinical signs of neglect like sores or injuries rarely occur by themselves, so past studies that only included those factors likely underestimated the scope of the problem, the researchers said.

Along with finding that neglect-related health problems were more common in for-profit nursing homes than in nonprofits, the researchers also found that community-dwelling patients had fewer of these problems than those in any type of nursing home. Community-dwelling residents live in private homes, often with family members or friends. The study also found that these residents, who need assistance with tasks related to daily living but do not live in a nursing home, had the fewest number of clinical signs of neglect compared with those living in any type of nursing facility.

“For-profit nursing facilities pay their high-level administrators more, and so the people actually providing the care are paid less than those working at nonprofit places,” Friedman said in a news release from the University of Illinois. “So staff at for-profit facilities are underpaid and need to take care of more residents, which leads to low morale for staff, and it’s the residents who suffer.”

Neglect can be hard to detect, the authors wrote, but without improved identification and reporting, it will be difficult to protect patients. A typical scenario is that a nursing home patient will be sent to a hospital, where substandard care is not recognized. The patient improves and is returned to the home, only to return again. The problem is starting to become recognized, though. Kaiser Health News recently reported that, starting this month, Centers for Medicare and Medicaid Services will begin handing out bonuses or penalties to nursing homes based on their hospital readmission rates.

The authors cited several factors that are barriers to improved screening within hospitals:

The issue of oversight is key because, while Americans are aging, there has been a small decline in the quantity of overall nursing home beds, as the number of government and not-for-profit nursing homes has fallen over the past 10 years, the study said.

Please download our FREE estate planning checklist. If you have questions about elder law issues in California, contact the experienced staff at the Northern California Center for Estate Planning & Elder Law today by calling (916)-437-3500 or by filling out our online contact form.